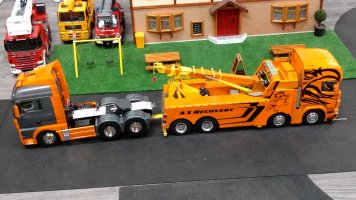 AsTec is a small UK based company that retails radio controlled model industry We now supply mainly 1/14th scale trucks and 1/10th scale crawler together with part to upgrade and modify them.

We started out in 1995 making ESC's and parts for fast electric model boats. We expanded to offer a complete service for fast electric boat modelers but following UK floods, a downturn in the economy and a loss of market we have moved into Model trucks and Crawlers together with an extensive range of spares and upgrades.

Over the years we have spent a considerable amount of time forming partnerships with suppliers to ensure that we can supply one of the largest range of quality products. We have followed that path and have old and new partners to supply our needs.

These pages was originally created on an Amiga 1200. Eventually the Amiga went out of support and we moved to PC. Originally the pages were hand coded using nothing more than notepad. Using Notepad rapidly became unwieldy and we found a product called Pageblender which was written by Steve Evans and was an extremely capable IDE (Integrated Development environment).

Shortly after that we started using PHP and Page blender supported development in that also. In 2011 Steve stopped developing and supporting page blender though we still used it but had been using Ultra Edit for PHP. With the integration of our shop (OsCommerce - written in PHP), Forum, some interactive parts on site and a purpose written administration module we took the step to move fully to PHP.

Now we use a content management system for the front end and OsCommerece for the shop.