Getting started with Beier Modules (4 controlling the engine sound)

The last article showed how to load sounds to the module. The Additional sounds can be triggered by functions (selected by stick position on the TX) The engine sound control is a little different and has its own tab under the configuration tab. This tab uses the sounds that were defined under the top level tab engine sound.

I loaded it up so you can see what is possible and this applies to the configuration engine sound tab as well. The tab is very similar in the USM-RC-2 soundteacher and the SFR1 soundteacher, this one is from the SFR1 application. 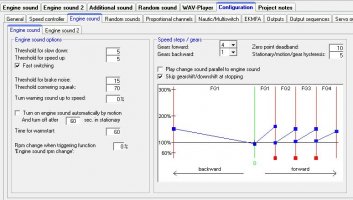 Moving across the screen is where it gets interesting, Speed steps and gears. You can see that I have 4 gears selected, its a max of 5 and you can change it by clicking the down arrow and selecting. I have a friend who has a truck that sometimes runs heavy and sometimes light. Gear changes do not suit it as when heavy they all happen far to early so it has a single loop with gear changes for the engine sound when running and only 1 gear selected.

To the right the zero point deadband defines the amount of stick movement from neutral before the sound does anything - you may have to play with this depending on your set up. The stationary/motion/gear hysteresis stops the unit switching between sounds too quickly I have not needed a lower number but a higher one may be needed with a heavy truck.

The next two boxes are self explanatory. I would suggest that when you are comfortable with the module then you play with these. I have been known to program several sd cards slightly differently and swap them at a meet.

As I showed in the prevous article you can load engine sounds for all the gears, gear chnges up and down and slowing down. The blue squares for each gear can therefore be in different positions. This model has the same sound loaded to all speeds (a minor glitch at one point meant that some sounds were no played, its now fixed so I could change this).  You can use this facility to maybe put a harsh sound on the lower gears and a softer sound on the higher gears and have different slow down sounds. On Phil Bergs Aussie rig I put jake brake on the third gear slow down.

Thats it for engine sounds EXCEPT to mention that The USM-RC-2 has a few ways of getting the throttle information. You can find this on the general tab under configuration. Digital mode is the standard for an esc that is connected by pass through to prop 1. Digital mode with UFR takes an output from the UFR1230 connected to prop 1 and it enables super accurate speed AND other information to pass from the UFR1230 to the USM-RC-2. Analog mode is for using one of the left hand inputs to pass speed information ( read the manual for more information)

That's it for this time!