Getting started with Beier modules (5 the ESC)

Beier actually sell 3 (at the time of writing) ESC modules. The UFR1230, UFR1230D (both esc and lights) and the SFR1(sound, esc and lights). To set the esc up under the configuration tab select ESC 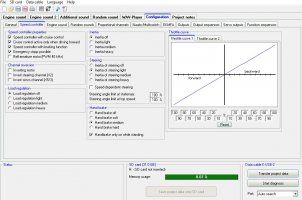 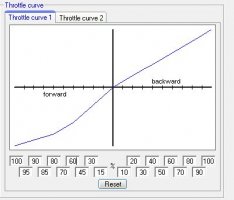 This is from the SFR1 but the UFR1230 tab is more or less the same except that some things are in different positions.

The first thing to look for is the speed controller properties. On the UFR1230 you need to decide how you want to communicate with the USM-RC-2 if one exixts. Digital communication passes through all theesc and lighting information and allows very accurate sound responses. At the time I used a UFR1230 I had a left turn and reverse warning added to the sounds - unfortunately the digital pass through for sounds is indicators so I could not use my additional sounds. I got around that by using direct 4 wire communications from the lighting outputs to the Grey block connectors In1 to In 4 and used those to trigger my sounds.

You can switch in and out of cruise control using one of the functions, this is available on both UFR1230 and SFR1.

The next box down switches the direction of the servos. The steering servo is as we will see not straight through!

Load regulation is good but you need to play with it to get it right. It aims to keep the vehicle moving at a constant speed - it monitors the current drawn and adjusts the throttle accordingly. You can clearly hear the effect when going up an incline or round a corner.

The next column Starts with inertia. I use inertia medium on my trucks ( heavy on the block truck) it slows the speed increase and braking effect and adds more realism.

Steering inertia I have not used but it will slow the application of steering. Speed dependent steering reduces the steering effect when you are going fast.

It allows you to adjust the actual throttle response to whatever you want rather than a straight line. I have done an example in the above picture - compare it to the first one. The forwards throttle has been adjusted for a curve that gives a high throttle response low down and lesser response high up. This is a personal preference thing so have a play.