Both the SFR1 and the UFR1230 have features that allow greater control over your speed.  For example, if you are a user of cruise control then you will find that it is not great for manouvering and/or in reverse. You may also find that the ESC takes off a little to rapidly and so on.

Now modern transmitters have built in curves for setting e.g. throttle response and you could use them BUT that still does not answer you manouvering problem. You may have noticed that under the configuration/Speed controller tabs there is a graph on the right that says throttle ci=urve1, and that has a second tab for throttle curve 2.

Now those tabs can be used to create similar curves to your transmitter but there are two, so whats that about? Well you can use a function to switch between the two curves, so you can switch from high speed to low speed for manouvering.

So here is a pic of a modified curve for manouvering... 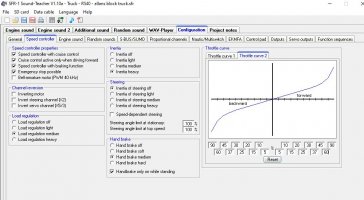 the boxes at the bottom are used to put the values of the curve points in. This curve allows a lot more low speed control (needs more stick) while retaining nearly all the top end (st the stick extremes). You dont have to use this, you can do your own thing.

Mostly I am happy with cruise and having to chnage direction but that but it can be a tad confusing so here is another idea. So here is another idea, there is another function called "cruise control on/off" so how about changing from cruise and into throttle curve 2 for manouvering. You would still have to select change of direction but you would have low speed control and not have to worry about cruise. To do that you would need to use a multifunction and set it up with cruise on/off AND throttle curve 2.

Have a play and see what suits you.