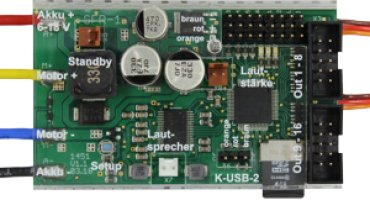 A few months ago Beier added to their latest range by bringing out the SFR1. This is a unit that combines sound, light and ESC, it is expensive but still a bit less than the two separates.

The unit is a little different in that it has only one amplifier ( but I only ever used one anyway), 16 light outputs, two servo outputs, 6 input channels, IR output plus the esc.The only thing that you cannot do is run the expansion module.

The esc is exactly the same as the ufr1230 and the throttle steering inputs - the control input is now integrated and rather than just outputs it can be sound - so you now have 4 control inputs. Beier have also added Sbus capability and that will give you up to 16 channel inputs. The module has two sets of 8 switched outputs, these use the same cables as the USM with the exception that channels 9 and 10 are +ve supply outputs. This may sound a little messy but all in all I found it neater than the previous separate +ve supply. Oh it also lacks the depress-able connectors and that does save space. The space saving over the two separate modules is significant.

I have been using the module for a couple of months and it does have certain advantages over the separates in that the internal communication is better. I also have a neater install and it all fits easily behind the false wall in my Scania where it was a tight fit before. There are always a couple of niggles though and one is that the volume is down by about 30 percent - this is because Beier were being conservative and that should be fixed shortly.

Since I use ORANGE RX receivers and they do ones with SBUS output I thought I would try that out. Just a little warning as SBUS is specified by Futaba so the first four channels are as defined on Futaba systems so where my ch 1 is throttle on sbus channel it is ch3. Now my original set up I used throttle on ch 1 (std Spektrum) and left ch 3 free. Then I thought I would use ch 3 for extra control, that is when it got really confusing!

SBUS is not the only way of extending your channels. First is the Nautic or mutiswitch which can give up to 12 two way switches, then EKMFA which is a count the switch in a position type of input that will 30 controls. but the channel 6 input can take Sbus or SUMD inputs, these ar both serial type inputs the SBUS being Futaba type and SUMD being the Graupner HOTT version. Both give extra channels with the standard 8 choices. Fully loaded that could mean 128 controls but in practice steering and throttle still need to be on standard channels.

As an aside I found out that all my SBUS channels have failsafe positions selected at bind. I assume a similar applies to the HOTT SUMD version but don't know.

To sum up, I am over the moon with this and it will shortly get put in my other trucks.